Camping in the Time of Covid 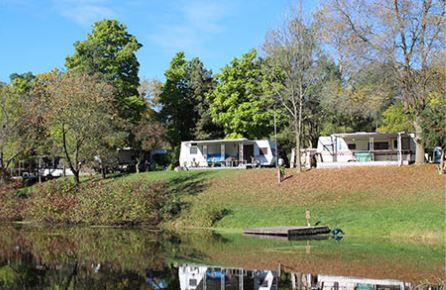 A lot of people think buying a campground would be a great retirement gig.  Living in a campground, country air, beautiful scenery, only work summers.  I mean, you’d live what people take vacations for!

I actually know someone who bought a campground after he retired a few years ago that had this opinion.  Did he ever get a surprise. He didn’t think he was to make it through the first summer

What people don’t understand is the headaches of dealing with multiple levels of government regulation, having to be a jack of all trades (septic to electrical, no job is too small, too big or too smelly).  Saturday night:  An underground water leak.  There you are digging a 3’ trench to find and replace the pipe, hopefully before anyone even notices.  A toilet gets clogged: you’re the one with the plunger.  Someone’s power goes out:  you are there with a flashlight, screwdriver and a meter.  You are on call 24/7

Having said that, I wouldn’t trade it for anything.  It is very similar to being a volunteer firefighter.  You are on call 24/7, the pay isn’t great, you will see and do a lot of things you wish you didn’t.  But it is also incredibly rewarding.

2020 was a perfect example.  In March, I had to send all of my staff home; closing my business because of Covid-19.  At the time, we had no idea when we would re-open.  I know a lot of business owners who were afraid if they closed, they would never re-open.

Ruby and I took a couple of days off, but that was it. We started preparing for re-opening and another busy season.  Campers were calling and emailing us non-stop.  Most were very supportive and appreciative of all our efforts, but we did get threatened with being sued if we did not open.  We were also threatened with being sued if we DID open.  It was a very emotional, confusing time for everyone.

The overwhelming sentiment I heard over and over was their passion for camping and how much they needed to get away from the city and the pressures they were under.  I had one lady tell me she lived on the 16th floor of an apartment building, terrified to use the elevator and not able to navigate the stairs.  She felt trapped and desperately needed her trailer.  She could not wait until the campground opened and felt safe again.  We also had a number of people returning from out of province and they really did not want to impose on family or make alternate arrangements.  They all love the freedom of their trailer.  It was not easy, but we were able to get all of our campers in with only a slight delay

In order to open last spring, I had to get authorization from the Mayor, Town of Caledon By-Law Enforcement, Region of Peel Health Unit and the Caledon OPP.  I was told I had better get all approvals in writing because I would have to present the proper documentation when the inspectors or police arrived.  By the time we opened, I was on a first name basis with the Solicitor General of Ontario and all her staff.

Last summer was incredibly rewarding, but I never want to go through that roller coast again.  To keep everyone safe, it took a huge effort that did not end until the last camper left in the fall. Ruby & I didn't do it alone.  We have an incredible staff and relied on many great campers to make it all work.  It was incredibly rewarding to see my youngest, Ryan, develop and implement a plan where campers could safely enjoy our pool.  Many thought it wasn’t not possible and I heard many say “not a chance am I going into a pool until the pandemic is over’.  We presented our plan to the Health Department and were able to open the pool just 1 week later than normal.  Once people saw the safety measures in place, many of the people who said ‘not a chance’ were enjoying the pool!

It is now January.  We are still in the midst of the pandemic, worse than ever.  I am still optimistic about the coming season though.  I think we proved to the government, and most important to our customers, we can provide them the safest vacation possible:  CAMPING.

"We stay at Leisure Time quite often, and find Scott and his staff to be very accommodating, the park is well maintained with lots to do, if you want to. We camp most of the summer and this is definitely one of our favorites."